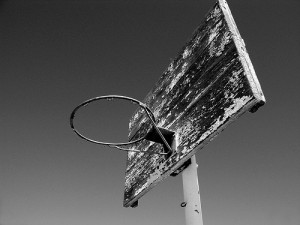 If you’re an average NBA fan you probably don’t have a clue who John Hollinger is. You probably haven’t ever seen his Power Rankings on ESPN.com either. Rest assured, you’re not missing much. It’s flawed at its core for one reason: it’s completely objective.

In everyday  conversations, most people would probably say that being completely objective is a good thing. But the reality is that a little bit of subjectivity is actually essential. In sports this is especially true.

There’s only one stat in sports where being completely objective works: wins (unless you’re talking about NCAA Division I Football, in which wins become subjective). The beauty of sports championships is that you can’t argue who the best team is once the season is over. Whoever won the title is best. Period. Even if that championship team hit a late hot streak and someone tries to say that “the best team didn’t win,” it doesn’t matter. A win is a win and a championship is a championship. There is no award for a team who was actually better than the team that won.

What Hollinger has done is created a ranking system in which the rank of a team isn’t affected at all by its wins. It’s not even factored into the equation. The only stat that he cares about is scoring margin. Whichever team outscores its opponents the most moves up the rankings. If a team only squeaks by in its wins they move down.

As I’ve blogged before, there is a problem with this system. It tricks up wins. The BCS has even dropped this stat from their ranking system, but Hollinger and ESPN are sticking with it. The reason there’s a big problem with using just this stat to determine the rank of a team, especially the way he has it set up, is that a team could go undefeated throughout the season and still be ranked last. Here’s why.

Hollinger’s formula is posted on ESPN’s site as this:

This probably makes no sense, so let me explain. There are two things he has done. First, he’s weighted home wins as meaning less than road wins. How he was done this is by setting it up to where if the home team wins by three points or less that win actually would negatively impact their rank. Second, he’s weighted the most recent 25% of the season’s games at 1/3 of the total value. This second part makes sense, but the home performance factor is still there, so in a sense the least valuable thing a team can do to move up in the Power Rankings is win at home.

The reason I’m pointing this out now is that the Mavericks are the best example of why this system is broken. As of this writing, the Dallas Mavericks are ranked 13th in his Power Rankings. That’s right, 12 other teams are considered to be better than the Mavs, who have rattled off ten consecutive wins (the tenth win hasn’t been factored in yet, though, since the rankings are updated each morning).

I’m not going to make a case yet that the Mavs are true title contenders this year, but I do know that they’re not near the bottom half of the league in regards to how good they are. After all, they do have the fourth best record in the league.

But with Hollinger, wins don’t really matter that much.

What do you think about his rankings?

Dirk Nowitzki is the best player the Mavericks have had since the 1980s, if not the best player they’ve ever had. But whenever his team struggles, which seems to happen far too often, Mavs fans seem to quickly turn on him and criticize every tiny flaw in his game.

This happened on Saturday, when he missed two jump shots and a free throw in the fourth quarter in a one-point loss to the Nuggets. I heard people complain on the radio about his shot selection. However, if you take a look at his career you’ll see that he makes those shots just as often, if not more often. His jump shot is one the key tools of his game.

In case you doubt it, take a look at what he did on Monday night. The same shots the he missed on Saturday he made on Monday. He only missed one free throw in the game (16-17), and that was in the first quarter. He made two clutch free throws with eight seconds left in the game, which turned out to be two crucial points because five seconds later Carmelo Anthony hit an eerily familiar three-point shot.

The bottom line is this. Dirk is a superstar. Anyone who doubts that just needs to watch the highlights below (or click here) from Monday’s game. The team had their backs against the wall and Dirk rose to the occasion. That’s what MVPs do.

UPDATE: I just noticed that after Monday’s 40+ point performance he’s tied for fourth among active players in most career 40-point playoff games.

The Dallas Mavericks were bounced from the playoffs in the first round for the second consecutive year. They have lost nine consecutive road playoff games (their last win on the road was to clinch the Western Conference Finals in 2006, which now seems like it was ages ago). They are 3-12 in their last 15 playoff games.

Here are my ratings of the top seven players (not including Devean George, who might not be back next year):

Dirk was one of the only bright spots for Dallas this postseason. He stepped up his game from the regular season, high ankle sprain and all. Unlike last year when Golden State made him a non-factor he imposed his will against the Hornets. He averaged a double-double, scoring 26.8 ppg (up 3.2 compared to the regular season) and grabbing 12 rebounds per game (up 3.4). He also average 42.2 minutes played per game (up 6.2 minutes over the regular season). He won’t be in the discussion of MVP candidates this year, but his performance this series should silence those who are critical of him not being clutch.

Bass played extremely well against his former team. He played 26.6 mins per game (up 6.9 compared to the regular season), shot 96% from the free throw line (only missing one shot), grabbed 6.8 rebounds per game (up 2.4 from the season), and scored 11.6 points per game (up 3.3). He never looked like he gave up on the series, always playing with passion. It looks like the Mavericks might have decent 2nd-tier player in the making.

While Bass and Nowitzki were the lone bright spots throughout the series Jason Terry had his moments. His three point shooting was impressive at times and he was one of the main reasons the Mavs even won one game. He basically gave the Mavs the same performance that he gave them all year, but he didn’t do it the whole series.

Mark Cuban & Co. pulled off the trade for Kidd for a number of reasons, including his experience in big games, playoffs, and his self-described ability as a closer. Those traits did not come out this year. His assists dropped by 2.7 per game (which may have been partly because of the lackluster performance around him). The biggest flaw in the series was his free throw shooting—he shot 62.5% from the line (down 19%) which led to a drop in scoring to only 8.6 ppg (down 1.3 pts). I’m not sure, however, how much of a difference Devin Harris would have made in this series.

The only thing good you can say about Stack’s performance against New Orleans is that he didn’t miss a free throw (5-5). Everything else about his game was terrible. His overall shooting was bad (31.6%) surpassed by atrocious three-point shooting (16.7%) and scoring that most any D-league player could put up (6.2 ppg). Former coach Avery must have had a man-crush on him since he played 20.4 ppg. He had recently been inactive from a groin injury, which may have contributed to his bad performance, but if a player is hurt in a way that it negatively affects his performance he should not be on the floor.

Erick Dampier might has well have taken the series off. He was a liability on defense being unable to contain either West or Chandler. He averaged 4.2 rebounds per game. I cannot adequately express how terrible this stat alone is. Chris Paul, who is a foot shorter than Dampier and plays point guard, averaged 5.6 per game. That’s embarrassing, but it doesn’t stop there. He shot 41.2%, which may not look bad at first but it is 23.1% worse than he shot during the regular season. It’s also bad when you consider that his shots are typically 5-7 feet from the basket. To top it off, Dampier shot 40% from the free throw line. That’s very Shaq-like. This makes me wonder if Mark Cuban ever regrets not offering Steve Nash the money that he ended up offering Dampier???

This postseason went up in smoke for Howard. His career is starting to look half-baked. Ok, now that’s out of the way, Howard was terrible on and off the court in the playoffs. First, he voluntarily admitted that he smokes pot during the offseason on ESPN Radio about five hours before game three. He passed out flyers about his birthday party to his teammates after game four and reportedly the partly lasted into the wee hours of the night after Sunday’s loss. On the court he wasn’t good either. He shot 29.2% from the floor, 10% from behind the three point line (I might be able to make one of ten shots from there), and his scoring dropped by 7.3 ppg compared to the regular season. All of this leads to one inevitable fact: Howard should be traded. It’s unlikely that the Mavs will get comprabile talent back for him, but it’s looking like he has become a poison to the team.

Even with all this doom-and-gloom, I’m not one who thinks that this team’s future is gone. I fully believe that Dallas will be back in the playoffs next year and may even have home court advantage in the first round. The other teams in the playoffs that Dallas can compete with or beat in a series are Houston, Phoenix, Denver, and Utah. Golden State and Portland are the only two teams who were out that have legitimate playoff hopes.

That said, it was a sad, downward spiral that was the 2007-08 Dallas Mavericks season.