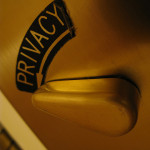 Mark Cuban just blogged about a new company he just invested in. While he didn’t give any details about who the company is, he did outline some of the key features. The two main features he described are: 1) Accurate, real-time stats on how many people or vehicles are in a given place at a particular time; and 2) Facial recognition of people in public places. Here’s an excerpt of what he wrote:

The next extension is to install it in places where we can add facial recognition software. So rather than someone checking in to a specific application, we would already know you are there.

I’ve been using location-based apps (like foursquare and Gowalla) for a little while now and I have conflicted feelings. At one point it’s kind of fun to let people know the places you’ve been or are at, but at the same time it’s kind of creepy to know that random people can know you’re not at home and can take advantage of that (see PleaseRobMe). I haven’t been creeped out enough yet to stop using Gowalla, but I’ve scaled back my use some.

What Cuban is talking about could take things to a whole new level. He’s right that many of us already have a publicly-accesible picture on our facebook profiles or other sites, so in a sense this data is already out there. But it would be really, really weird to walk into Walmart and hear a computerized voice say “Welcome, Kevin Rossen.” I imagine that something like that will happen in the not too distant future. I can think of some cool ways that churches could use a technology like this.

What do you think? Go read Mark’s post then come back here to discuss. I’d love to read your thoughts!

—UPDATE—
TechCrunch posted about this today and thought they had some interesting thoughts as to when this type of technology might be commonplace. I think they’re on to something. Here’s an exceprt:

But to say that the check-in is 2010 implies that 2011 is going to be the year this stuff starts coming into play. I say no way. We’ll be lucky if we see that kind of stuff in play in 2020. Not because the technology isn’t there — it definitely will be, and probably already is — it’s because we’re just not there yet as a society.

15 thoughts on “Public Facial Recognition: The End of Privacy or Awesome Use of Technology?”