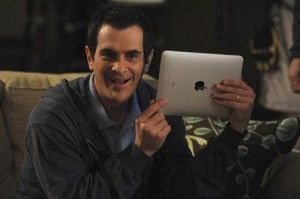 I’ve had my iPad for about six weeks now, so I thought I’d post some follow up thoughts to my initial review. Bottom line: I still love it!!!

It’s extremely unusual for me to pull out my MacBook Pro (MBP) over the weekend now. Almost everything that I want or need to do I can do on my iPad, and usually do it quicker. It’s really convenient to pull it out and browse the web, check Facebook or Twitter updates, shoot off a couple emails, or play Angry Birds (I’m so addicted to that game). It’s been a great addition to my tech gadgetry.

Here are a few of the things I love about the iPad in no particular order:
– Battery life: it’s flipping amazing. I can use it for about 4-5 hours and it only hits about 50% remaining power. I’ve never seen another device like it.
– Noise: it’s completely quiet (except for pushing the home button). It’s not like the MBP has a jet engine or anything, but it does make some noise. Other laptops I’ve had in the past make even more noise, so having something that produces no noise from cooling fans is awesome, especially when the wife is sleeping next to me.
– Heat: there is none. Again, this relates a lot to using the laptop in bed (which could probably be another post in and of itself), but the iPad NEVER GETS HOT! It’s awesome and I’m not sure how they pull it off. Even my MBP gets pretty hot to the touch at times. Not the iPad.
– Apps: even with the limited selection (for now) there are some really, really nice apps that take advantage of the amazing screen on the iPad. I really like the new Documents To Go app that was released June 1. It does everything I need for basic word processing and office apps (and syncs with Google Docs/DropBox/MobileMe).
– Simplicity: it’s so simple a baby can use it (OK, maybe a toddler). I know because my two year old can turn it on, switch between app pages on the home screen, choose the app she wants to play, and make the apps do what they are supposed to do. It’s really amazing to see.
– Social: it’s a magnet for discussions and better at being social. There have been quite a few times that I’ve been using it out in public and someone has come up and asked me about it. That happens with almost every new tech device, but this seems to happen quite a bit more and the conversations I’ve had have been longer and more in-depth. Pretty cool. Also, when I’m meeting with someone I can just set the iPad on the table and everyone at the table can see what’s on the screen and interact with it. It’s much more social than a laptop.

It’s not a perfect device (hello, Apple: fix the wifi bug soon!!!), but it’s quickly become my go-to computing device. If you need to print stuff frequently (I don’t) you probably won’t like it as much as I do. But if you’re looking for something that’s a lot of fun, easy to use, and just plain works I highly recommend picking up the iPad. I haven’t regretted it once.

What about you? Do you have an iPad? What do you like or hate about it? If you don’t have one, are you planning on getting one? Why or why not? Share your thoughts in the comments below!