Almost every night I put my two year old daughter to bed. It’s about an hour long process between bath time, brushing her teeth, reading a book and Bible, prayer time, and singing songs. It’s honestly one of my favorite parts of my day, because I know she will be doing these things on her own in the not too distant future. I remind myself that I’ll miss these moments, so I’m trying my best to relish every moment.

Last night God taught me a lesson on prayer through my daughter’s prayer. I usually lead her through a series of things to thank God for. After a few regular items (family, friends, etc.) I prompt her to say thank you for whatever she thinks of. Typically she will look around the room and say thank you for the things she sees. This usually includes her butterfly mobile, toys, and the flowers her aunt painted on the wall.

Usually I just smile and think it’s cute that she’s just praying for what she can see, but last night God really convicted me that I should be truly thankful for every little thing I own. Sadly, I usually take these things for granted and skip on to the “bigger” things in life. But the life and faith of a two year old doesn’t allow the small things to be skipped over. And so I was reminded again of the importance of coming to Jesus with a childlike faith.

Thank you, Emory, for teaching your daddy one way to be more like Jesus. 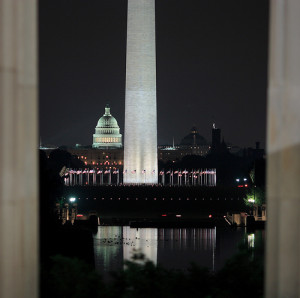 I’ve heard more discussion about this year’s election than I’ve ever heard in my entire life. This might be because I’m getting older and my ear is tuned more to politics, but it could also be an indicator that our nation is more interested in this election than any other time in recent history. There have been numerous stories of record early vote turnout and the expectation that there will also be long lines at the polls today. If the 75+ people that were lined up outside the church building this morning at 6:55 am are any indication this is no doubt true.

Being a full-time Christian minister I’m privy to a number of conversations that I most likely would not have otherwise heard. I’ve discussed and heard discussions about this year’s election from a number of different angles. I’ve heard people say things like “If you’re really a Christian you will vote Republican.” I’ve heard someone say, “I’m a Christian so that means I’m voting Democrat.” I’ve also heard people say that neither candidate is really worth of the Office, so they’re either not voting or writing in another person. This election is being hotly debated for sure.

The Bible has some things to say about the role of Christians in politics. It talks a lot about being submissive to earthly rulers:

Christians are also instructed to pray for our leaders: “First of all, then, I urge that supplications, prayers, intercessions, and thanksgivings be made for all people, for kings and all who are in high positions, that we may lead a peaceful and quiet life, godly and dignified in every way” (1 Timothy 2:1-2). One of the coolest ideas I’ve seen lately related to this concept is for us to “Pray Backwards” (RagamuffinSoul.com), which basically means to pray for God to bless the other candidate(s) that you did not vote for with wisdom in leadership. This is a valid idea and it also teaches us a dose of humility, since our way always seems the right or best way.

I’ve seen and heard a lot of discussion about praying that a particular candidate is elected President.  I’m not opposed to praying bold prayers (see Luke 11 & 18), but I also know that God will accomplish his will on earth regardless of who is in office. He’s done it before and he will do it again and again. As Christians, our hope is built firmly on the foundation of faith in Jesus Christ and His Kingdom alone, not the Office of the President nor any earthly kingdom.

So, should you move to Canada, France, Mexico, or another country if your candidate is not elected? Absolutely not. Will America be more of a Christian nation if a particular party is in power? No. Our Founding Fathers may have been religious people, and possibly even Christians, but it’s most likely that they were Deists. The laws they established may have biblical roots, but that is where the connection ends. Their goals was not to establish another Christendom. It was to establish a county with religious freedoms.

History has shown us that when the church has too much power it can become corrupt and unspiritual (think about the Crusades) and lose sight of its mission. When the church is in power it’s easy to get comfortable and forget that Jesus commanded us to make disciples of all nations (Matthew 28:18-20). We should be involved in politics, but our primary allegiance is to God and His true Kingdom: the church.

So if you’re hoping and praying that McCain will be President, but Obama wins, or if you’re pulling for Obama and McCain wins, don’t lose hope. Also, don’t get too confident if your man wins. They are earthly leaders and are prone to sin (Romans 3:23). Place your faith, hope, and trust in the unchanging power of the Gospel of Jesus Christ.

The past few days have been somewhat frustrating around the house. We could not find our digital camera. This normally would be frustrating anyway, but we had not copied pictures from the card off of it for over a week, so there were a bunch of pictures of Emory and family on it.

Over the weekend there were two times that I know God was reminding me that he wasn’t kidding about wanting us to “pray continually” like he told us to do through Paul in 1 Thessalonians 5:17. I knew I should pray about the lost camera, but it also seemed like such a small thing to bother God about. My brother-in-law Chris was the first person God spoke through. He told me that his normal routine now is to pray about lost items as soon as he realizes that he’s misplaced something. He told me about a time in college that he couldn’t find his wallet, stopped to pray about it, and as soon as he was done praying he looked down and the wallet was sitting right there.

The second time that I knew God was wanting me to pay attention was when my mom called me to tell me she found the camera. She told me that she had started looking for it, stopped to pray, and then the first place she looked she found the camera. Let me be clear that Brea and I had just gone over to my parents’ house the night before to look for the camera and had looked in the recliner where she found it. It’s not a coincedence that I didn’t find it. God had a lesson he wanted me to learn. He wants us to pray to him about EVERYTHING in our lives…even the mundane.

If you have any stories about answered prayers, even the smallest ones like a lost digital camera, I’d love to hear them.